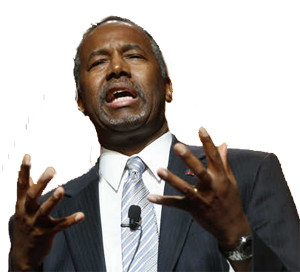 Of all the untrustworthy candidates for the Republican presidential nomination – – and believe me there is not much to trust in any of them – –Blinky Ben Carson takes the cake. “Blinky” because he seems to have that tendency to blink that most pathological liar’s seem to have. It is that he is aware that he is lying (blink) when he is talking about having been accepted at the United States Military Academy, when he was not, or having taking a certain course at Yale university that was not even offered at the time he was there (blink), or as representing himself as some kind of a teenage tough guy when he was growing up when nobody seems to be able to be found who remembers him that way, that Ben’s brain knows that he is lying (blink) This guy can out lie Carly Fiorina and that is saying something.

But then again Ben’s blinking response might be attributable too to the fact that he is also probably the biggest crybaby to ever run for political office. If you ask Ben to verify something that he has said he will probably start whining that you are a member of the liberal media and are out to get him. Ben was the one who was behind the revolt of the GOP candidates who now want some kind of a softball process of the so-called “debates” that would ask questions like “ What would Jesus recommend as a way of lowering tax rates for billionaires?” Ben is a whiner as well as a liar.

But more than that I think Ben is the sleaziest of a bunch of sleazeballs. This is a guy who is used to getting his way, of being on the receiving end of obsequies, and of having his authoritarian way in the OR. As a president he would be an absolute tyrant.   Don’t be fooled by those soft-spoken sibilant tones, or those gesturing hands that are always telling you that he’s the best guy to separate your Siamese twin children, or that special intelligence that informed him that prisons create homosexuals and the pyramids were actually build as ancient granaries, and that The Affordable Act is worse than slavery was. Ben is a stupid authoritarian whining liar, which make him one of the most dangerous sons of bitches that ever hankerd for the job of president.