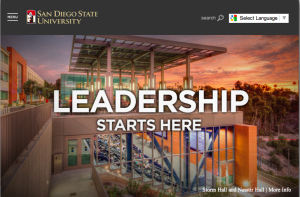 A few years ago I was riding on the light rail system in Hong Kong’s New Territories. I was sitting in front of a bulkhead with a glass frame for advertising posters. The poster in front of me was mostly in Chinese, but the pictures were obviously promoting some hearing aid company. But it was the company’s slogan that caught my attention: Enhancing Hearing Impairment into the 21st Century. I decided to write a piece about stupid corporate slogans and catch phrases. Now comes my former place of employment, San Diego State University, an institution that seems could not sell itself out any faster to corporatism than if you handed its current president stiletto heels, fishnet stockings, and a black leather micro-mini skirt (he can afford them, see below).

SDSU is hardly alone in the corporatization of American education from pre- to grad-school; it’s a pandemic. And it’s a sell-out that is also responsible for the mounting student debt (averaging nearly $29K/graduate) that is being purchased at the expense of maintaining expensive programs while cutting academic offerings, substituting adjunct for tenure track teaching positions, and increasing the pay of deans and presidents (SDSU’s new president took a $100K increase, to $400K, while student fees were being increased). So much for the “leadership” of university administration.

I got a little direct experience of this during my three year disillusionment as the director of the school of public administration in urban studies. At the time there was a $50 fee that students paid for supposedly “instructionally-related” activities like the debating team and such. But that had long been almost entirely expropriated to support the costs of maintaining the football team. So there was a campus-wide campaign to double the amount of the fee so that the additional amount could be devoted to the original intent of its use for instructionally-related activities. Obviously, the original $50 was going continue to go to the football team. Department chairs in school directors were approached by central administration to encourage positive passage of this proposal. Eventually the proposal passed, but as it turned out most of the additional $50 to the fee also went to the football team. I joined the faculty union around that time. But SDSU is hardly alone in the history of these sorts of shenanigans by University administrations.

It was also the beginning of my personal countdown to retirement and before that spending as much time on sabbaticals and teaching and lecturing assignments at foreign universities. For several years now I have been an Emeritus Professor, but have not returned to do any instruction at all at Corporate SDSU.

But the beat goes on. These days SDSU has its own corporate slogan. Yup: “LEADERSHIP STARTS HERE” (“Loving It” and “You are an Army of One” were already taken). “Leadership” is a hot buzzword these days; like “sustainability.” Maybe they should have made it “Leadership Sustained Here.” Whatever. The university now has commercials that its runs on KPBS-TV with adoring students and professor shills pumping what a great place of learning and research it is that have that same gloss and smarm as a phone plan or insurance company spot. Mad Men comes to campus. Go to sdsu.edu and see if you can discern the difference between public education and private corporate promotion.

Recently, in a posting (Vol.97.1) I made reference to the SDSU Department of Tourism and Hospitality’s involvement with an Indian casino. It brought me back to a piece I wrote on the occasion of my retirement. At the time I complained:

I concluded the piece with the following observation, relating to the embarrassing corporate sign recognizing my retirement that greeted me one day on the I-8 exit to campus: 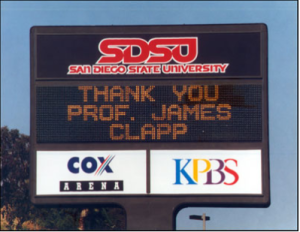 So I can only wonder what passing motorists on the freeway thought that Prof. James Clapp was being thanked for, since there is no mention of his retirement from 33 years of teaching. Maybe they are just glad I’m gone.   Since I am an “Emeritus Professor of City Planning” I could return to contribute to the university’s new mission. I’ve been tinkering with a new course idea: “Brothels, Casinos and Strip Joints: Iniquitous Land Uses and the Sustainable City of Tomorrow.” I would have a lot field trips; the university likes it when you do things to boost enrollment. And, to be sure, my students would be leaders in this new area of public service.