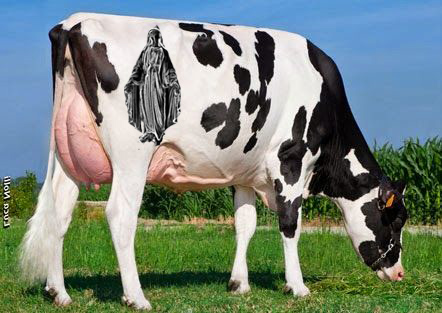 Christians in upper Minnesota are ecstatic over the discovery of a very convincing image of the Blessed Virgin Mary, mother of Jesus, on the right flank of a Holstein dairy cow owned by the Olsen Dairies, west of Hibbing.  The discovery came by way of the image’s appearance to a young milkmaid, Maria Olsensdotter, who just happen to be praying her devotions to the blessed virgin in the meadow as she does each day.

The discovery caused a sensation, first in the surrounding area full of white Christians, and then was spread by major and social media postings to a wider world.  The highly detailed image in black and white cow fur was quickly denounced as some sort of a prank, but Father Christopher Christianson of Christ the Redeemer Church, himself once a dairy worker, conducted a close-up inspection of the image.  “Each individual hair is grown right from the animals hide, just like the other spots,” the priest said, just before uttering, appropriately, “Awww, shiiiiit,” when the animal dropped a load all over his shoes.

But among the local faithful this is regarded as a miraculous sign, and soon after “meadow muffins” were being scooped up and applied as medicaments for a variety of dermatological afflictions.  Within days, crowds of believers began showing up at what the local Chamber of Commerce had dubbed the “Lourdes of the North”:  people in wheelchairs and with a variety of physical afflictions, a variety of nuns and representatives of other clerical orders, even the biker gang “The White Line Apostles” came over from not-too-distant Sturgess to get tattoos of the BVM on the right cheeks of their asses. Business is booming, not only in BVM yogurt, cheeses, ice cream and other dairy products, but also in dried meadow muffins.

However, the responses not been all that positive. Father Nicholas Christophercic, a Serbian Eastern Orthodox Priest, remains, comatose in a local hospital after having been kicked in the head by the now famous cow after attempting to suckle at one of its sacred teats, which President Trump tweeted is a miraculous cure for Covid 19 and erectile dysfunction.