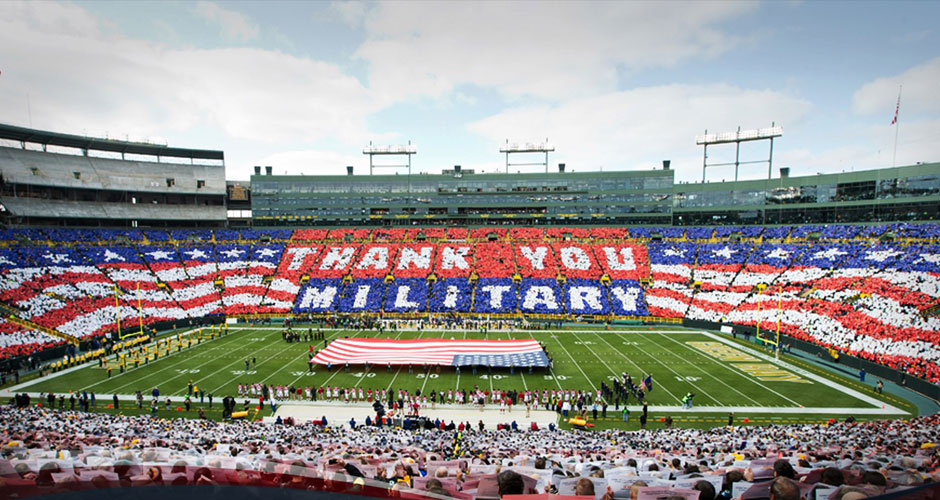 Sports, professional and amateur, are currently consumed with the limitations on their conduct presented by a virus that flourishes in the environment of sweaty bodies and puffing lungs. Otherwise consumed with concussions, racially offensive team names, and star athletes beating up their wives and girlfriends, the NFL, NBA, and professional baseball leagues and collegiate conferences are under various forms of scrutiny while awaiting one of those lab geeks who wasn’t on an athletic scholarship to come up with a vaccine that might not only save their athletic career but professional and collegiate sports.

So there is plenty of time for thinking about sports in America. This posting is concerned with one simple proposition that, if it ever returns to what it was, applies to all of it. THE SEPARATION OF SPORT AND STATE.

Yes, I know all too well, America has done a colossally shitty, if not a contradictory job with the ideal of separation of church and state.  No, it hasn’t, because religion is one of the legs the shaky cultural chair that America sits upon, it is the perverted and fanciful moral postures that give impunity to all the other hypocrisies—the racism, the militarism, and the unbridled capitalism. These fundaments of the American culture permeate most everything, and sports, with their elementary competitiveness, are an excellent platform for a country that regards itself as historically and teleologically superior to all other states and cultures.

At the Olympics or other international competitions where athletes are putatively representing their respective nations, it is appropriate for national flags to be displayed and there to be other appropriate demonstrations of patriotism.  Admittedly, sometimes this is carried on to an annoying chauvinistic fervor, especially by those who regard their country as the greatest in the history of the world. But when the ports business New England Patriots contest with the Miami Dolphins, or the Ohio State Buckeyes battle the Michigan Wolverines, there is nothing international about it, just taking a little bit of DOD promotional cash on the side. It is Americans versus Americans, and the gratuitously flag-festooned helmets and jerseys seem as silly as a politician’s flag lapel pin.

So when huge flags are pulled out over the playing fields to be stretched taut by people in military camouflage, and military jets are flown over the field before the national anthem (arguably one of the feculent pieces of music that is usually screeched buy some third-rate, washed-up American Idol star) literally forces all in attendance to demonstrate, or fake, patriotic posture and reverence that is tantamount to being a grade school kid made to recite the Pledge of Allegiance.  Nevertheless, faux democracies like the US can insist upon at least a “show” of unconditional allegiance, which, of course, is precisely what motivates Donald J. Trump to refer to anyone taking a knee during the show as a “son of a bitch.”

The patriotic fan show–and the patriotic athlete show—happens at every damn sporting event, even high school games.  It forces people like Colin Kaepernick to risk their entire careers for expressing their misunderstood First Amendment rights in a context that is not much more than a form of indentured servitude.

For me, the flag show and that shitty patriotic anthem should be removed from contaminating athletic performance.  America has plenty of other means of demonstrating its hypocrisy.

Will it not be ironic if it justly turns out that an invisible little pathogen forces our corrupted professional and amateur sports institutions to take a knee?